In the wake of growing globalization and digitalization, protection against tampering and counterfeiting is becoming increasingly important. Security Document World 2019 to be held as part of Identity Week in London from June 11 to 13 is specifically dedicated to these issues. Schreiner PrinTrust is a specialist in security and RFID labels for government uses and will showcase solutions for document protection and vehicle identification at SDW 2019.

Third License Plate for Vehicle Marking and Identification
Vehicles without proper registrations cause massive damage worldwide—from tax losses to vehicle thefts to higher security risks such as the circumvention of access controls. These issues call for effective measures to deter and provide faster proof of fraud and abuse: Schreiner PrinTrust’s Third License Plate is a  security label that is affixed to the inside of a windshield and thus complements the conventional metal license plates because externally installed plates can easily be stolen, copied and illegally reused.

This cannot readily be done in the case of the security label because it is located inside the vehicle and features additional protective mechanisms against tampering and counterfeiting. The self-adhesive seal bears the vehicle data issued by the registration authority and is able to cover additional applications such as proof of insurance, proof of taxes/fees paid, parking permit, toll or access control.

Adhesive Document Seal with Patented Starter Tab
Documents authenticated with conventional stamps and signatures are relatively easy to counterfeit. For non-experts and supervisory authorities it is often difficult to detect fakes. By contrast, adhesive document seals from Schreiner PrinTrust have provided clearly enhanced protection against counterfeiting of registration certificates and other official documents for several years. With a patented invention, Schreiner PrinTrust has raised the user-friendly security labels to an even higher level of sophistication: The new seal is now provided with a patented, slightly adhesive starter tab that reliably sticks to the user’s finger while the seal is positioned on the document. Proper application is ensured without damaging the sensitive adhesive coating on the back of the seal. The document seal can be reliably and precisely placed and fixed on documents. An audible click while bending the starter tab indicates to the user when to peel off the liner film. After the seal has been applied, no adhesive residues will remain on the employees’ fingers. 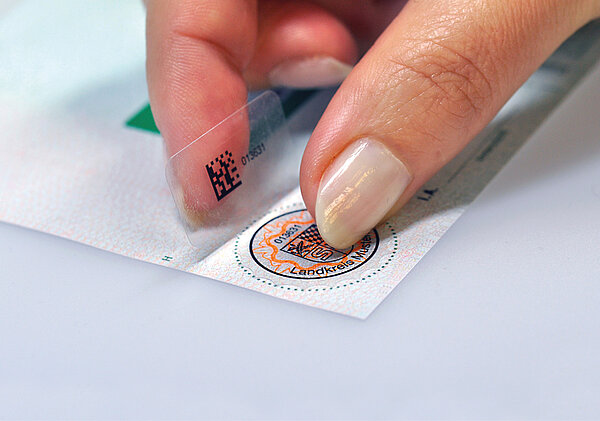 Schreiner PrinTrust, a business unit of Schreiner Group GmbH & Co. KG based in Oberschleissheim near Munich, Germany, develops and markets specific functional and security labels for system suppliers and service providers focused on identification and authentication solutions. The unit’s activities are centered on customers such as card manufacturers, RFID system integrators and suppliers of products for government authorities. Schreiner PrinTrust’s portfolio is focused on customized self-adhesion products and services for PIN protection, NFC-Stickers for contactless payment, RFID solutions for automatic vehicle identification, as well as products such as vignettes, stickers and transfer seals serving as proof of payment of official fees or as access authorization.